A mammoth experience in the Shropshire Hills. The route is 21 KM with a 6 hour time limit.

An off-road half marathon with 650m of elevation, this challenge should not be taken lightly. With a generous time-limit though, this event is suitable for everyone from experienced fell runners, to slower walkers. It’s tough going at times with some stiff climbs but rewarding too. We promise incredible scenery, great food and drink and a friendly Shropshire welcome at our checkpoints. Make lasting memories in a special place.

The route is a figure of eight, with the Discovery Centre forming the start, finish and mid-point of the route.

The route begins by heading out across the river Onny into the hamlet of Whettleton, scene of a bloody skirmish in the civil war, when the Parliamentarians defeated Royalist troops in a fierce battle. The route climbs steeply through the woods, before emerging to reveal a huge vista over the Clee Hills, and Shropshire’s highest summit of Abdon Burf. Don’t worry though, you don’t need to climb this one today, it’s just for looking at!

There is a descent to Norton village, and then you climb to the Iron-Age hillfort of Norton Camp, passing through the beautiful coppice woodland along Rotting Lane, before returning to the Centre along the banks of the river Onny.

The second section will soon get your heart beating as you climb to Halford wood, and onwards through the hamlet of Lower Dinchope and up again to the tower known as Flounders’ Folly, built by the eponymous Victorian shipping magnate who claimed to be able to see his ships entering the Manchester ship canal from here! At over 300metres above sea level, this is the highest point on the route. From here you enjoy a descent to Wenlock Edge, an ancient limestone escarpment before following the River Onny back to the Centre and the finish.

Get up close & personal 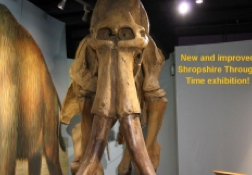 Find out about the chilling Ice Age and meet our mammoth – a full size replica of the skeleton found at Condover, near Shrewsbury. 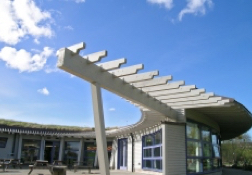 Our delicious home-cooked meals are prepared using local produce to bring you a true taste of the Shropshire Landscape, with Sunday lunches a speciality.

Events & Activities for everyone 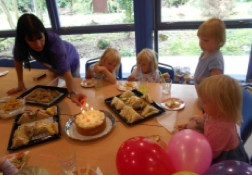 There are regular family events and workshops throughout the school holidays to keep children and adults amused and entertained as well as on-going adult workshops and cookery courses.

30 acres beside the River Onny 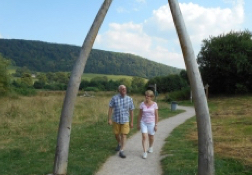 FREE ENTRANCE to 30 acres of riverside paths, wild flowers and woodland all in the shadow of an Iron Age hillfort.

Design and make your own recycled paper, adding grass and flowers from our...

Can you build a house which will withstand the huff and puff test? Enjoy...

Learn the life cycle of these fascinating creatures and make a flextangle...

Come and meet a dragonfly down at the pond and make one from natural...